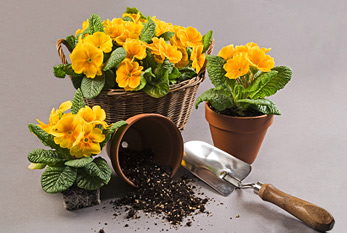 Plant Where They Will Bloom

It is well know around my circles that I have a brown thumb. Not only can I not sustain the life of complex flowers and plants, but I can even kill those “hard to kill” varieties. I read the literature and buy the products to no avail. The outcome is the same. But I keep trying. I almost feel sorry for the little seedlings or baby plants when I purchase them. Little do they know that

It’s their time to die.

In my struggles to turn from a life of botanical murder, I have learned a few things along the way. One of them is the importance of using the right size pot.

You don’t want to use a pot too small for sure. Plants need room to develop. Their roots need space to grow within the pots without becoming root bound.

However, you also do not want to put a small plant into a container that is too big. For example smaller plants with shallow root systems do not do as well in a larger pot because it is difficult to keep just the right moisture balance in the soil to help the plant to thrive and grow strong.

How we develop our staff, preparing them for leadership, is a delicate process, not unlike cultivating a vibrant plant. Once you have recognized leadership potential in a staff member, you are responsible for developing that staff into competent managers that will lead their team towards the mission and goals of the agency. I have heard the saying, “Bloom where you are planted.” But for Social Work leaders, my challenge to you is to “Plant where they will bloom.”

Christopher was like a Marvelous Impatiens. You could say he was an impatient impatiens. He became a social worker in a non profit agency right out of college and immediately impressed his superiors with his dedication, his ability to handle crisis and his ambition. Within one year he became a supervisor, demonstrating organization and positivity that was appreciated by the leadership. Within 6 months, he was promoted to manager. The agency leaders smiled and congratulated themselves on their eye for talent.

After a month as manager, Christopher’s director began getting complaints about him from his program staff. They cited examples of him yelling at them, berating them for late submissions and even talking about them with other supervisors. When these issues were addressed with him, he was very defensive, citing that the expectation was for his program to produce and he was given staff that didn’t have a good work ethic. The director told Christopher that production and output were not the only expectations of a manager. Managers also had to be able to take new and struggling workers and develop their skills with coaching, modeling and work planning. While it was important to maintain accountability, yelling and berating were not the way. Realizing that Christopher was struggling in his new role, the director set up a plan to work with Christopher on leadership developmental skills and managing a program.

What happened to Christopher to bring him to this place? Chris was a shining star, a showy flower if you will. All his energy before this point had been to rely on his own work ethic and abilities to shoot up the ladder. When he promoted up to program manager, he didnt have the experience or foundational base to handle the complexities of engaging a large staff around program goals. He could not understand why they couldnt just be like him. In his frustration, he tried intimidation as a motivational tool.

It did not work.

In other words, he was planted into a big pot, before his roots had time to develop. Although it sounds counter-intuative, plants can actually have their growth stunted by being in too big a pot.

As leaders in the social work field, maintaining your agency mission means developing new leaders and creating transition scenarios for each level of promotion: supervision, management even director. Learn to spot staff with potential at each stage.

But remember, the art of growing beautiful plants lies not just in finding the right size pot, but also paying attention to the needs of the plant and provide for them.

For staff, as you assess their strengths, also look for growth areas. Create development plans for them and go over in every meeting. Cultivate root development and emotional maturity. Working with your supervisory/managerial staff to reach their leadership goals helps the agency to maintain consistency in practice, and ensures when you are gone, that mission lives on.

15 thoughts on “Plant Where They Will Bloom”