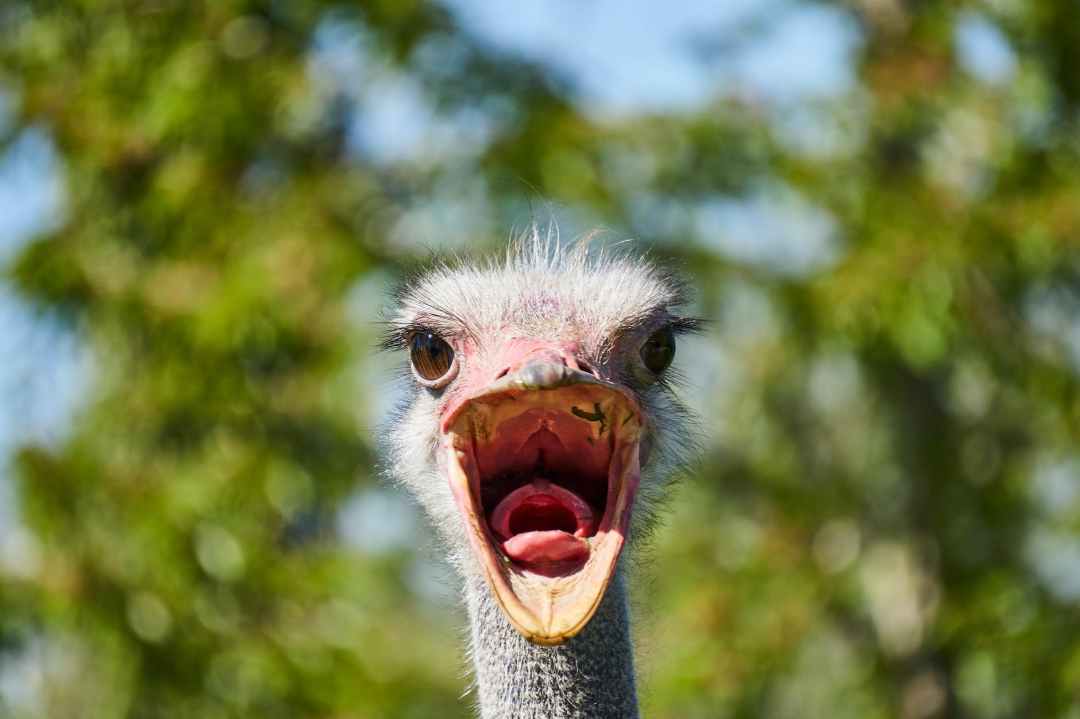 You know the old adage often used when describing a person hiding from the truth? You might call them an ostrich. Because we all know that ostriches bury their heads in the sand when faced with danger.

Actually, that is a big old myth. Ostriches don’t actually bury their heads in the sand to avoid danger. I mean, have you seen the size of an ostrich? What possible good would it do for the huge bird to bury its rather small head, leaving the rest of him exposed? And how would it breathe? According to research, what looks like head burying is actually the momma Ostrich turning her eggs, which are buried in the sand.

Hey! I get it! It is so easy for us to bury our heads when faced with harsh, unpleasant or uncomfortable information. That type of truth challenges our feelings of safety. In our hearts we know we should listen and deal with unpleasant things. But it brings us such a feeling of unease. Unfortunately, not being aware of something doesn’t mean it isn’t happening. That is true of so many things in our lives. For example, racism, gender bias, the inequality of the class system and other hotbed issues go on whether we want to know or admit it.

The unpleasant truth I will focus on today is Child Maltreatment in the United States.

Child Abuse is one of those topics that we would rather not think about. We want to believe that children do not suffer like reported on the news. We want to believe the situations are exaggerated and that parents and other caregivers couldn’t possibly seriously harm their children. We would never even imagine doing the things we hear about to our children. And if we are honest, we share a common response when faced with hearing of the tragedy of others, to instinctually feel a tug of guilt and relief that the same is not happening to us.

I have experienced first hand, throughout my career, thousands of children who were victimized by the very adults who were supposed to nurture and protect them. Even after the abuse ends (usually from intervention or serious injury/death) the effects of that trauma seep into every aspect of their lives, causing major difficulties in daily functioning. I have often heard other family/community members say: “They will get over it when they get older.” That is such an uninformed and untrue statement. For, even after they become adults, the trauma can and often does affect them. Children who suffer abuse/neglect are more likely to use drugs, become incarcerated and even become abusive to their own children.

So, no, Child Abuse is not a pleasant things to be aware of.

And the victims are closer than you might think.

Rather than cause you secondary trauma by recounting specific abuse cases, I would like to share the impact of Child Abuse on the United States. This is how Child Abuse affects your family, even if you have never abused a child in your life.

6.6 million children are reported every year to the Child Welfare agencies for abuse/neglect investigations. 1 in 3 girls will be molested by the time they are 18 years of age. 1 in 6 boys will be molested by the time they reach the age of 19. In the United States of America, 4 to 6 children die from abuse every day, according the the CDC and Child Abuse National Report of 2014. In that same year, over 700,000 children were found to be indicated victims of abuse and neglect.

The CDC ACES project has studied Adverse Childhood experiences for decades and found multiple health/emotional/mental concerns with children who have been exposed to trauma in childhood. These concerns include: Illicit drug abuse, alcohol abuse, domestic violence, depression and suicide. Other sexual concerns include: early sexual encounters, STDs, multiple sex partners, and unwanted pregnancies. When you read these concerns you might also be thinking of someone you know who exhibits some of these concerns. If you judged them harshly, does it change your mind at all to know that their behavior deficits manifested after they were victims of trauma?

Financially, the cost of child abuse affects all of us. Factor in the costs of Child Welfare agencies, judicial hearings, lost wages of parents, lost wages and mental health treatment of the victims, special educations and medical costs. The financial burden to every tax payer for Child Abuse tops 120 billion dollars. Additionally, children who were victims of abuse/neglect are 9 times more likely to end up in the prison system.

Again, I understand that the information is unpleasant to hear. But does it change your view knowing that child abuse in the United States affects you and your family? I hope so. Because then we can discuss how you and your tribe can contribute to the decrease of abuse in your community.

What can you do? Your actions are just a pebble in an ocean. True. But by taking action, that pebble could start a ripple effect that influenced others to throw in a pebble. Here are some things you can do to stem the tide of child abuse and neglect.

I can’t, in good conscious say, “Don’t be an Ostrich” since I have debunked that analogy. But I can say, “Don’t be a striped pajama squid!” You can play a vital role in the reduction of child abuse/neglect in your community. Take the time, educate yourself and take some action! Start a Ripple! Be the Change you Wish to See in the World (Ghandi).

12 thoughts on “Being Aware”